Vincent Van Gogh, like many artists, drew a lot and for many different reasons. Often, an artist will draw to hone their skills at rendering figures or scenes. As their talent progresses, drawing is still necessary but in many added ways. Before a painting is started, an artist will draw out the composition on paper because it is quicker and easier to change than painting. Even after that, once an artist knows what he wants to paint, he may draw a rough outline on the canvas and then paint over that drawing. Other times, a drawing may be a finished piece, showing the artist's skill as a draftsman. Van Gogh produced drawings for all of these reasons and more.

In the early 1880’s, Van Gogh was enrolled at the Academie Royale des Beaux-Arts in Brussels and was studying anatomy and perspective. He would continue drawing to master his craft throughout his career. In Study of Hands, Self-Portrait, and Tracing of the Japanese Courtesan Figure drawings, you can see van Gogh making drawings that aren’t meant to be final pieces for public viewing.

When an artist like van Gogh is planning on making a painting, he will make preparatory drawings, or sketches, to work on elements of the painting. You can see the beginnings of his paintings in his drawings. In The Sower, done in 1881, Van Gogh copied a painting by Millet. Later, in 1888 when van Gogh painted Sower with Setting Sun, he used a figure in the same pose. Van Gogh places a man in a field throwing seeds to the ground. As the sun sets, the sky is lit with golden sunlight and the ground is cast in flecks of blue and purple shadows.

In 1881 and 1882, Vincent drew multiple pictures of men and women in sad poses or in a tired, worn out posture. In Worn Out from 1882 van Gogh shows an old man sitting in a wooden chair, bent over with his elbows on his knees and his face buried in his hands. Originally it was drawn as van Gogh was learning to make lithographs, or prints, and was titled At Eternity’s Gate. 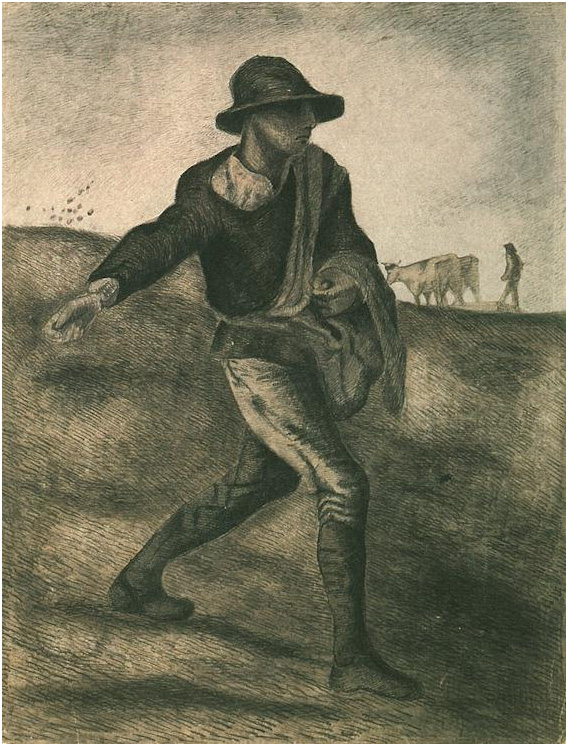 It wouldn’t be until 1890 when van Gogh was in Saint-Remy that he would paint a version of this man. In the painting he shows the same man, in the same pose, in the same room. However, the painting shows him in vivid blue clothes with brown shoes sitting on a bright chair. The figure is outlined in a darker blue which makes it feel more flat than the drawing, less modeled. The painting, titled Sorrowing Old Man (At Eternity’s Gate) was done just two months before van Gogh died, and shows the emotions he must have been feeling as his mental state was declining 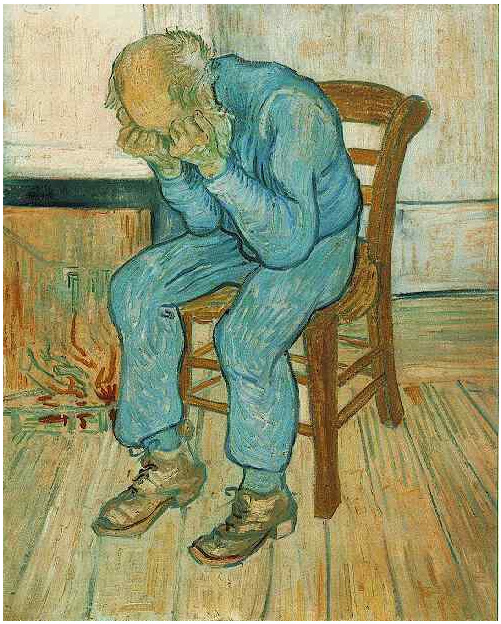 Many of van Gogh’s drawings were done after he painted a subject. For many artists the finished painting is the last step, but van Gogh often drew it again for various reasons. He was painting and writing back to his brother and friends constantly. Beyond just describing what he was painting or including small sketches, he went back and drew his pictures on paper and sent those with his letters. Van Gogh’s Café Terrace at Night shows the outside of a café in Arles, France. To the left is the café with the seats outside, lit in yellow, and behind the dark blue of a night sky. Van Gogh said “I find satisfaction in painting things immediately” and painted this on the site, working without a preparatory drawing. He enjoyed that he painted a night scene without using any black. After he had painted the scene he made a drawing of it, as drawings are easier to share and don’t require the long drying time of paintings. The drawing is almost all line-drawings with almost no shading, except for that of the night sky. 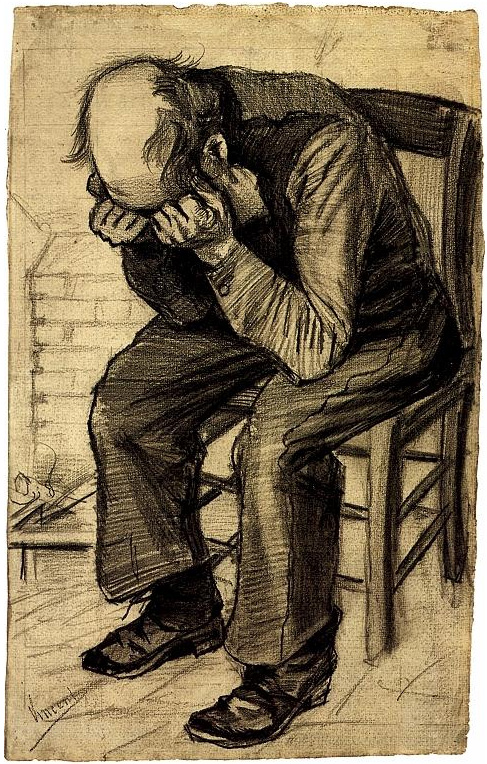 Van Gogh’s drawings of completed paintings were not just copies, rather he took the opportunity to rethink his compositions and change them to give them new life. Since drawing and painting require different techniques and produce different results, van Gogh was able to adjust the drawings for the different medium and create almost entirely new pictures, giving the same impression as their originals.

Van Gogh wrote letters constantly. Nearly every day of his career is documented in his letters to his brother Theo or other artists. When Vincent was planning a painting or had recently completed one, he would sketch it in the letter or on a separate sheet of paper, or, on occasion if paper was not immediately available, an envelope. They are much simplified versions of his paintings showing just the most important elements to give the reader an idea of his most recent work.